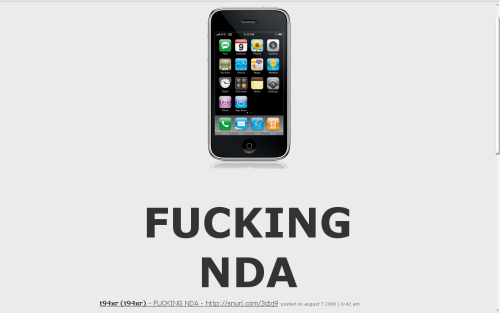 Apple’s been getting some heat from the iPhone developer communities around for it’s NDA policy. Developers are legally banned from sharing code, discussing or exhanging tips on coding through forums or email.

I’m quite sure there are hidden scenes all over the net that Apple’s all seeing eye can’t get to but for the general developers this is a major setback.

The [FUCKING NDA][2] site is just one example of developers venting out their frustrations. The site tracks “FUCKING NDA” twits. From the numbers of new twits showing up all the time the message is quite obvious that freedom of choice is not something Apple wanted to hand over to it’s loyal users. Sad but true….