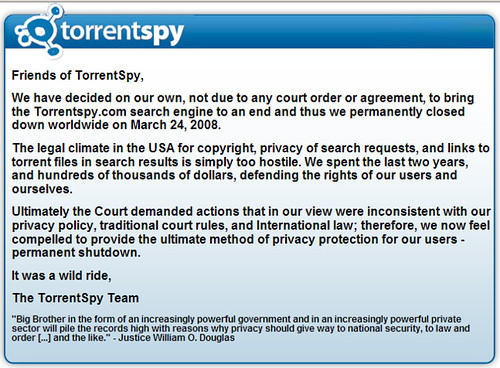 Torrentpy, once the most popular torrent site on the net has finally decided to shut it’s doors and pack up permanently. Why? Well as usual MPAA is the culprit, 2 years of battling the the MPAA proved to be too much for Justin Bundell, the fonder of Torrentspy.

Ã¢â‚¬Å“We have decided on our own, not due to any court order or agreement, to bring the TorrentSpy.com search engine to an end and thus we permanently closed down worldwide on March 24, 2008.Ã¢â‚¬?

Those were Justin’s last words for Torrentspy.

Torrentspy was directed by the courts to log all user activities and have them submitted to the MPAA. Torrentspy came back by locking out US based users but that was not enough for the MPPA hence the decision to close it’s door. Protecting their user’s privacy was more important to Torrentpy and I respect them of that.

I’ve always used Torrespy as one of my main source for torrents and wish there was something I could have done to help.